UGH! I've been slacking in posting to my blog lately. Just been busy with some things going on at home -- and still really tired! I wanted to share some pics of a belated Father's Day dinner at Cheesecake Factory. We decided to go on the Wednesday after the Father's Day holiday because P had some things to do with his two older daughters on Father's Day.

If you've never been to the Cheesecake Factory, be prepared for a long wait (they don't take reservations). I can assure you though, that the food makes the wait worthwhile.

To kill time, we walked around Waikiki. We came across a guy with some parrots who was happy to let us pose and take pictures with them. The birds were so adorable! 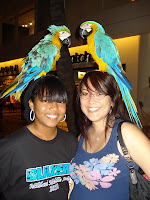 After about an hour of waiting, our pager went off (YAY!). We didn't take pics of all our meals, but we did take a pic of Mikayla's GINORMOUS pizza as well as the delicious cheesecake we had for dessert! 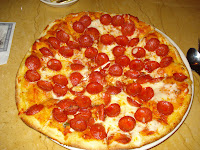 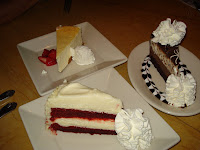 P had the low-carb cheesecake with strawberries. I had the tuxedo cheesecake, and Mikayla had the red velvet cheesecake. Mmmmm...heavenly! Click on the pictures for an enlarged view of the Cheesecake goodies!
Posted by Dena at 2:39 AM