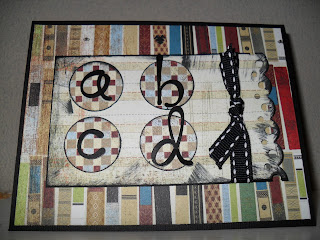 Welcome to DAY TWO of our weekend School Blog Hop! You should have came from Amber's blog hop.  I hope you've enjoyed what you've seen so far.  There will be a grand prize winner drawn from those who comment on all of the blogs both days. The grand prizes are from Cloud9 who is giving away a $20 gift certificate to their store. And Jens DigiStamps who will be giving away a $5 gift certificate to their store which is worth five digistamps. I would appreciate it if you could take the time to check out their sites if you have time.  We are happy to have them as our sponsors.
Cloud9
http://designsoncloud9.com/
and their facebook page
http://www.facebook.com/pages/Designs-on-Cloud-9/189551027737837
Jens Digi Stamps

Now, if you are just joining our hop, you may want to start at the beginning here.
I'm really loving the BasicGrey Oxford line of papers!  I had a lot of scraps from the card I made for yesterday's project, so I thought I'd put them to use for today's project.   In the picture, the notebook paper I used looks a little crooked, but it's really not.  (Sorry, bad angle when taking the picture! ACK!)

I used Sketch 134 from Card Patterns.  As with yesterday's card, I inked the notebook paper and also inked the punched circles.   I also added Doodlebug cardstock stickers.  The border punch is by Martha Stewart.   Thanks for looking!  Please hop on over and visit Shelley's blog next! 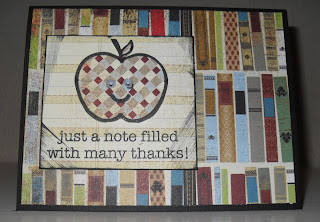 Welcome to the School Blog Hop! You should have came from Amber's blog hop.  This is a two day blog hop in which we will feature different projects both days. I hope you enjoy as you are hopping along. There will be a grand prize winner drawn from those who comment on all of the blogs both days. The grand prizes are from Cloud9 who is giving away a $20 gift certificate to their store. And Jens DigiStamps who will be giving away a $5 gift certificate to their store which is worth five digistamps. I would appreciate if you could take the time to check out their sites if you have time as we are happy to have them as our sponsors.
Cloud9
http://designsoncloud9.com/
and their facebook page
http://www.facebook.com/pages/Designs-on-Cloud-9/189551027737837
Jens Digi Stamps

Now, if you are just joining our hop, you may want to start at the beginning here.
For my project, I made a really simple thank you card using BasicGrey's Oxford line.  I really love this paper!!!  To begin, I stamped an apple image using a stamp from Imaginisce.  I then added googly eyes.  I'm thinking I should have used bigger ones, though!  I cut out the apple and pop dotted onto a different sheet of pp (patterned paper) which resembles lined notebook paper.  I then inked the edges of that pp in a grungy sort of way since the background pp has a slightly grungy look to it.  I then pop-dotted that onto the base pp.

Hello, friends! I got exciting news last week! I've been selected to be a Garden Girl on a new challenge blog called Friendship's Garden. It's my first stint on a Design Team, and I am really looking forward to the challenge!

Speaking of challenges, there is a twist to this challenge blog. Stamped images are not allowed! You may used diecuts, clipart, and anything else that is not a stamped (or digital) image.

Our first challenge will be up on October 5th! I hope to see a bunch of you come by! 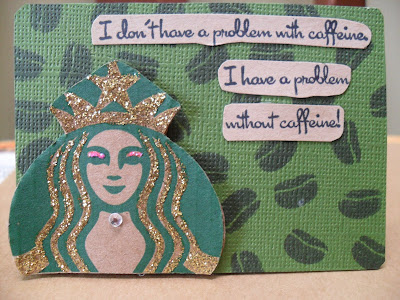 I once swore off making any more ATC's, but I have recently found them a nice break from working on bigger projects. I participated in this month's ATC swap hosted by ManLe at Pineapple Cove. This month's theme is "Recycled".

I adhered cardstock to chipboard ATC's. I like to use chipboard ATC's for my base because they are really sturdy. I stamped the cardstock with a coffee bean stamp. I originally planned to emboss the coffee bean images but could not find my heat gun. Hate when that happens! LOL I then stamped the sentiment and cut it up so it could fit on the ATC nicely.

That's it for now. I have lots of other projects to work on in the next few weeks, so I hope you come back to visit! 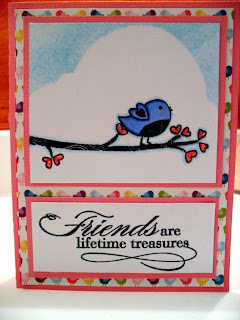 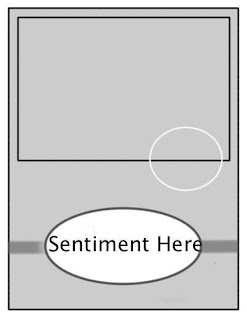 Hi! Welcome to the Sketch blog hop! The purpose of this hop is to show how all of these talented bloggers can take the same sketch and come up with totally different cards. If you've never used a card sketch before, give it a try! Be sure to check back on Sunday, as there will be some bloggers posting cards on day 2. So sit back & be inspired.


If you've just joined the hop from my blog and want to start at the beginning, start here.


I decided to go with a friendship card for my project.  I used stamp sets by Hero Arts and then colored with Copics and accented the hearts with Stickles.


You will notice that I didn't follow the sketch to the "t".  I sometimes use a sketch as a starting point and may sometimes deviate a little, depending on my preference or what I'm working with. One change I made was to not use an embellishment  in the middle right section of the card.  I felt that the cluster of hearts on the branch added "weight" to that area, so adding another embellishment would have thrown off the balance of the card.  I also did not add ribbon under the sentiment.  I had already matted my sentiment and did not have room to include ribbon or twine because the sentiment was so large.  I'm still happy with the card, though!  Thanks for looking!


When you're ready to move on, visit Denise here. 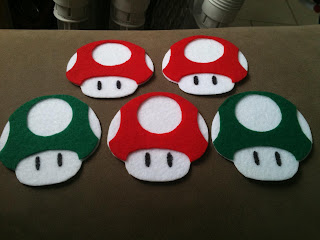 Hi, everyone!  As I mentioned previously, my baby turned one this past Saturday, and we threw a birthday party for her.  We went with a superhero theme.  I'll be posting tons of pics later, but for now, I wanted to share some felt mushrooms I made for my nephew to put on his cape for the party.
My nephew is almost three years old and loves Super Mario!  While Super Mario isn't exactly a superhero, I knew that my nephew would love to decorate his cape with something from the videogame.  While searching the internet for a digital cut file, I came across this Super Mario Mushroom SVG file.  I used the MTC software and a cut file I downloaded here.
I first cut a mushroom with my Cricut and then traced the images on felt to be handcut after.  If you look closely, each mushroom consists of only two pieces.  The base was pretty easy to cut.  The top piece wasn't so bad.  If I remember correctly, these mushrooms are about 3 inches high.  For the eyes, instead of cutting and gluing those small pieces, I used the negative as a stencil and colored in the eyes with a black Sharpie pen.  Easy peasy!  My nephew lined up all five mushrooms -- or "toads" as he called them -- at the bottom of his cape.  It was so cute, and I wish I had taken a picture! Darn!  He did LOVE his cape, though!!!
Anyway, if you have a son or daughter that is in to Super Mario, he or she will probably love these.  I'm thinking of even using them on cards.  They are just too cute!  Thanks for looking and have a great Friday!
Posted by Dena at 11:43 PM 11 comments: 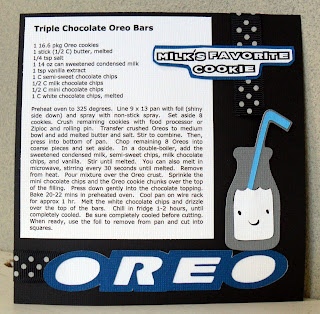 Hi, Bloggers!!!  I hope you all enjoyed the Labor Day weekend!  It's been a while since I've posted.  I was crazy busy planning and working on things for my youngest daughter's first birthday party which was on Saturday.  I LOVE planning events, but I always worry that I will forget something important!  I was so glad when it was over.  Everyone had a great time and loved all the little details.  I will be posting tons of pictures once I can sort through them and type out everything.

Today, I am sharing a recipe card I made for an Oreo Cookie Recipe Swap.  I was really happy with how this turned out. I found the Oreo font online and used it to create the OREO logo at the bottom and also to type out the Oreo slogan:  Milk's Favorite Cookie.  I used the Create-a-Critter cartridge to cut the milk bottle and pop-dotted it to add dimension.  Isn't that milk bottle just too cute?  LOL  I also added some black and white polka dot ribbon that was leftover from my daughter's party..heh..heh.  Oh, for the record, I haven't actually tried this recipe, but it sure does look YUMMY!  Enjoy!
Posted by Dena at 12:51 AM 5 comments: