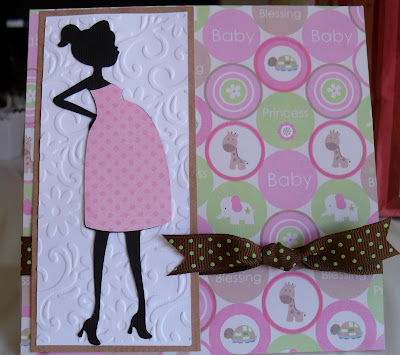 Hello, Friends! Hope you are all enjoying the weekend. I had a nice Saturday with friends. We threw a surprise baby shower for a girlfriend expecting her second baby. I was excited because most of my friends are done having kids, and I didn't think I'd have an opportunity to help plan one for a long time.

The first thing I want to share is the card that I made for my girlfriend. I used the Kate's Silhouettes set from svgcuts.com. I love how girly the images in this set are! The color scheme we went with for the shower was brown and pink, so I chose to use some pink patterned paper for the woman's dress. I really wanted to coordinate the diaper cake and the card. The background paper on the card is by Imaginesce. When I first saw it, I knew immediately that it was the paper I wanted to use for the card and diaper cake. 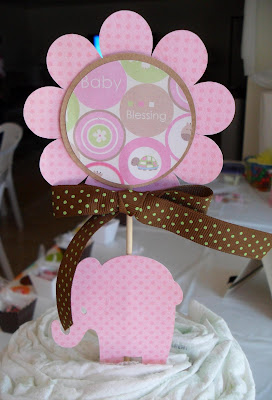 This is a close-up of the cake topper. I used a cut file from Lettering Delights to cut the flower. I used the Elliot the Elephant freebie cut file from svgcuts.com. I thought Elliot was the perfect choice since the patterned paper I used included images of an elephant. I really did want to add more to this diaper cake such as flowers on the sides of the cake, and maybe some baby blocks behind the elephant on top of the cake. Unfortunately, I just didn't have enough time. :( 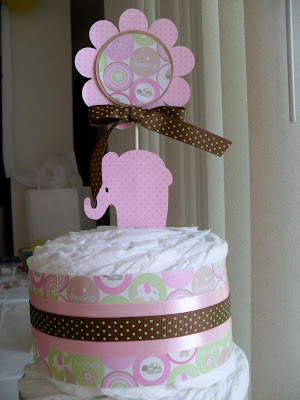 Here is another picture of the top layer of the diaper cake. I really like the spiral type of diaper cake vs. the type where you roll each diaper and secure with a rubber band. This version is way quicker! 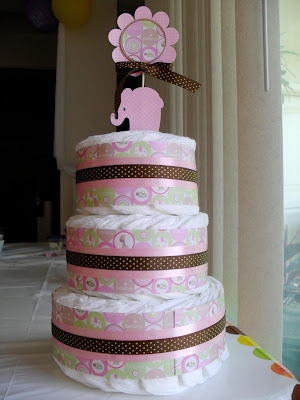 Full view of the diaper cake 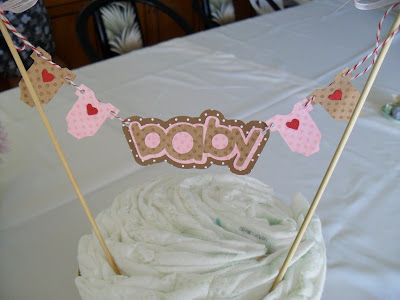 This is a cake bunting that I made for the baby shower cake. All images were cut with my Cricut using MTC and cut files from Lettering Delights. The hearts on the onesies were from the MTC software. I have to say that I really dislike how the Cricut fails miserably at cutting intricate items. The hearts were crooked! :(
Other than that, the bunting was pretty easy to put together. The trickiest part was securing the twine to the skewers.

At the start of the party, I actually put the cake bunting on the top layer of the diaper cake. Later, I put it on the actual baby shower cake. Unfortunately, I don't have a picture of that.

I enjoyed creating these items for the baby shower. I highly recommend using the same patterned papers for everything in as much as possible. It's just nice to see everything all tied in together. I'm happy to say that I got a lot of nice compliments on everything.

Well, I hope you all have a fun and safe Fourth of July weekend! Thanks for stopping by!
Posted by Dena at 12:40 AM 6 comments: