Another Birthday Card with the Cricut Hello Kitty Cart 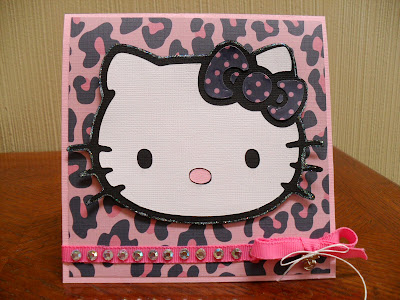 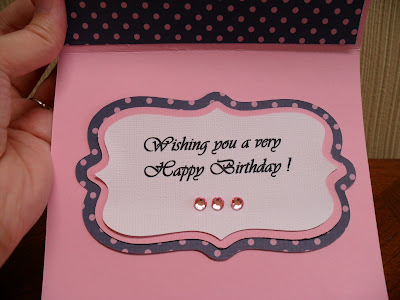 I've been making a bunch of cards lately! Here is another birthday card I made recently. I used the Hello Kitty Greetings Cricut cartridge. The gal I made this for is a Hello Kitty fan and also loves cheetah print. So, of course, I incorporated both into this card! I knew I wanted to add some bling, so I started adding some to the pink ribbon. Before I knew it, I added a long string of bling resulting in what looks like a blinged-out collar perhaps??? With Hello Kitty, I like to add Glossy Accents to her bow, so I made sure to do that on this card. I also like to use Stickles. For the inside of the card, I first printed the sentiment and then cut out the top note style shape with MTC. I then layered the top note shape and added some bling.

This week, I'm working on some stuff for a baby shower I'm going to this. I'm kind of excited because I'll get to work on a theme that I rarely work with these days -- only because the majority of my friends are done having kids (or so I thought, LOL). I just hope my projects turn out the way I want them to. Thanks for stopping by and hope you all have a great Tuesday!
Posted by Dena at 1:57 AM 6 comments: 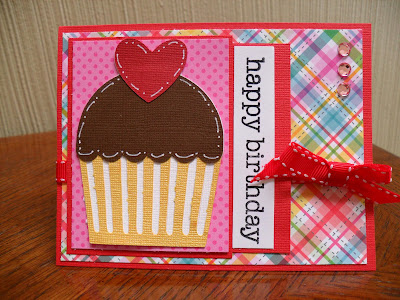 Happy Saturday, Bloggers! I have a busy weekend ahead, but I guess that is typical for any Mom, right? LOL I have tons of projects to work on, a doctor's appointment for Maddie, a graduation party tonight, housecleaning, etc ... A Mom's job is never done! =)

Well, today I'd like to share a birthday card I made for our niece. She's 12, and I was a little worried about making a card that might seem too kiddish for her. I think cupcakes fit the bill for people of all ages, so I cut a cupcake from the Sweet Treats Cricut cartridge. I really love the bright color combos on this one. I added some ribbon and bling to finish it off. Thanks for looking! :)
Posted by Dena at 8:29 AM 2 comments: 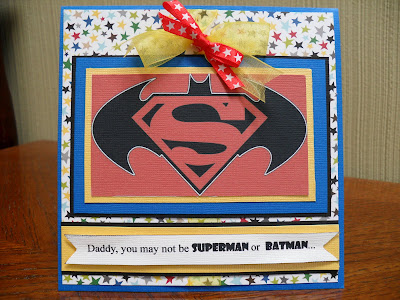 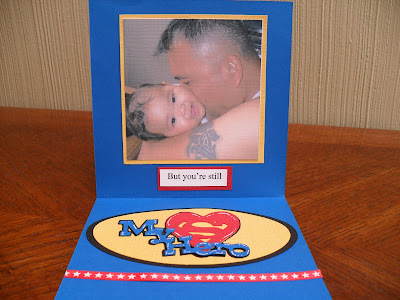 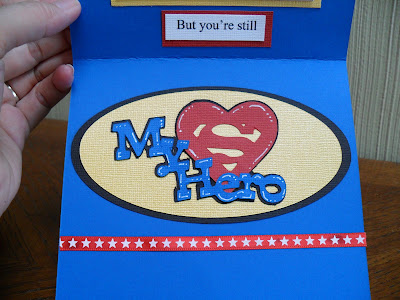 Hi, Bloggers! Hope you all had a nice weekend. Father's Day Sunday was pretty low-key because it was a work day for my boyfriend. We did have pancakes from the Koa Pancake House at his request, though. He is off Tuesday, so we are going to have a nice family dinner in town. Looking forward to it! For his gift, I surprised him with a tabletop gas grill that he wanted. I also made a Superhero Father's Day card for him.

My boyfriend likes Batman, but I didn't have a Batman SVG or the Batman cartridge. I decided to do things a little "old school" and downloaded a superhero image that I thought was perfect for the card. It's an image of the Batman and Superman logos merged together. I typed and printed the wording on the front which says "Daddy, you may not be Superman or Batman".

The inside of the card continues with "But you're still MY HERO". I included a picture of my boyfriend with our daughter printed on cardstock. I wish I had printed it on photo paper, but I didn't have time to go hunting through my boxes for some. =(

I used a white gel pen on the "MY HERO" diecut and also added some sheer ribbon to the front of the card with some red ribbon with stars on it that I had been dying to use. I'm always my own worst critic, so I always feel that there's room for improvement. But overall, I was satisifed with how the card came out. If you're interested in the "MY HERO" SVG file, here is where I got it from: http://bgladpapercrafts.blogspot.com/2010/11/my-hero.html (sorry, links aren't working properly here right now). I used MTC and my Cricut to cut the image. Thanks for visiting. Have a happy Monday!
Posted by Dena at 1:08 AM 5 comments: 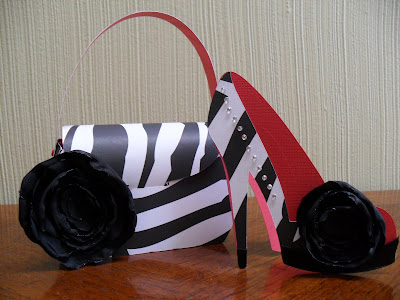 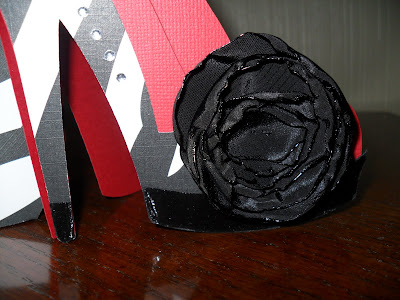 One of my favorite go-to sites for svg files is SVGCUTS.com. They have a lot of really great sets to choose from and AWESOME customer service! I've had this particular set for a while but only just now got around to using it. I'm a stiletto gal, so I immediately fell in love with the high heel shoe svg file.

I immediately knew which paper I wanted to use with it. It's some zebra-print paper that I had in my stash for a while. I used two sheets: one for the shoe and one for the matching purse. There are some flower files that come with the set, but I really wanted to make some satin roses to adorn the shoe and purse. I am pretty sure I saw something very similar in real life! =)

The shoe file actually opens in the other direction, so I "flipped" it in MTC before cutting it. I also added glossy accents to the sole of the shoe to give it that patent leather look. The original cut file does not include a rubber tip for the heel, so I added one myself just because all of my shoes have a rubber tip on them. I also added some bling. I originally wanted to add some feathers behind the flowers and something large and blingy to the center, but in the end, I decided to just get it done and leave it as is. I may still add some bling or sequins to the center one day! I really love this set. It's definitely one of my favorites! =)
Posted by Dena at 11:26 PM 6 comments: 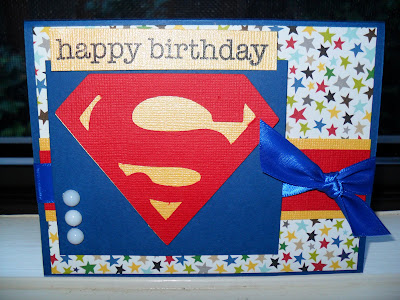 Hi, all! It's been a little while since my last post. Everyone in the house has been sick including me. I'm feeling better but still have a nagging cough. Last night was the first night I was able to sit down and do some paper crafting. It felt good! =)

I made a card for a first birthday party we are going to this weekend. The party will have a superhero theme and the birthday boy will be dressed as Superman. I figured that a Superman card would be perfect.

I found the Superman logo from the My Time to Craft blog. I will have to update this post later with the direct link as it doesn't seem to be linking properly right now. I used some cute star patterned paper from Bella Blvd's Mr. Boy line. I really love this paper because it's so versatile. I added ribbon and a Happy Birthday sentiment. I have two more birthday cards to work on this week, so I'll see you later!
Posted by Dena at 10:12 PM 5 comments: