Ooh, YUM! Aren't these cookies way TOO CUTE??? One of my hobby goals is to work on my decorating skills. Pretty, decorated sugar cookies are at the top of my list. I hope to one day soon be able to have my cookies look as professional and gorgeoous as these! I have a bunch of cookie cutters already, but I would love to add this cookie cutter to my collection *adds to Christmas wish list*. Now, if YOU want a chance to win the cookie cutter along with some other goodies, check out http://glorioustreats.blogspot.com/. I recently discovered this blog and fell in love with it. There are some great party ideas there. Good luck!
Posted by Dena at 12:52 AM No comments:

Saturday morning, Mikayla and I went garage saling in hopes of finding treasure amongst other peoples' trash. We started at 9, after having breakfast with the bf and a service appt. at the car dealership. We were out until around 12:30, hitting up about a dozen garage sales. Some were drive-bys where we simply drove by to scope things out and then left without even getting out of the car. We were both pretty happy with the day's take. She spent a whopping $9.50 and I spent about $27 -- not bad considering all that we got. 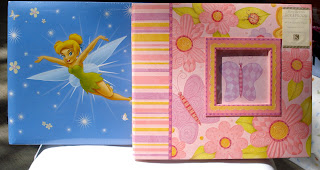 I absolutely LOVE these two 8 x 8 albums. One is a Tinkerbell album by Sandylion. The other is a Tim Coffee K & Co. album. I love how girly his stuff is! Both were brand new and in the original packaging. I checked online and both retail for around $25 each. At the garage sale, they were priced at $5 each with an additional 50% off! That means I paid only $2.50 for EACH !!! WOO-HOO!!!! I think I am going to use the pink one as Maddie's first scrapbook album. As for the Tinkerbell album, I can't decide if I will use it to scrap pictures of Mikayla's Disneyland album, or create layouts and sell the entire album on Ebay or Etsy. Decisions, decisions ... 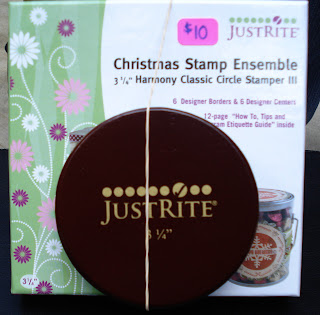 My second favorite find is this set of Christmas stamps by JustRite Stamps that also included in the wooden base! I've been wanting some of their stuff, but pricing for a set like this with shipping to Hawaii would run me around $45. I paid TEN DOLLARS at the garage sale. YAHOOOOO !!!!! 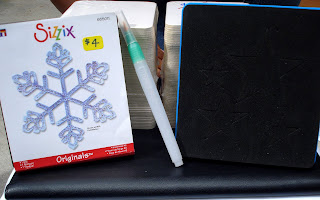 I love blank chipboard and was happy to find these two stacks of square coaster-type chipboard pieces marked down to $2 per stack (back of pic)! I have so many ideas for these, and at $2 a stack, I couldn't resist! I also found a Sizzix snowflake die that I've been wanting. The other die is an Ellison die that contains four different sizes of stars. Stars are so versatile, so I know I will make use of it. Both dies were only $4 each! I also got one of those water pen thingamajigs marked down to 50 cents! 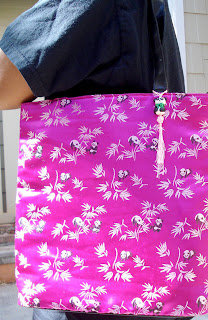 Here is one of Mikayla's favorite finds of the day. It's a hot pink satin tote bag with bamboo and pandas on it. She absolutely loves it. It cost her only $2 ! 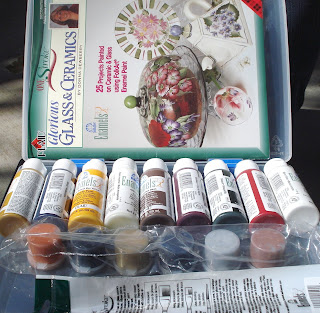 Her other favorite find was a brand new ceramic paint set that set her back only $2.50! She's already used it for a mini canvas painting. I'll post that as soon as she's done with it. 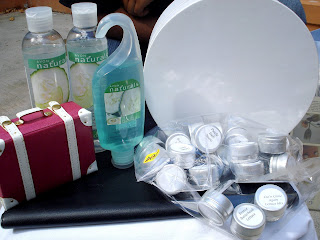 She also got a tote bag (not shown), a bunch of metal containers which she plans to put her paints in while painting, a little trinket box shaped like a suitcase, a naked container (right of photo) that she plans to alter with sb paper and embellies, and 4 bottles of Avon products and Avon lip balm (not all are pictured). 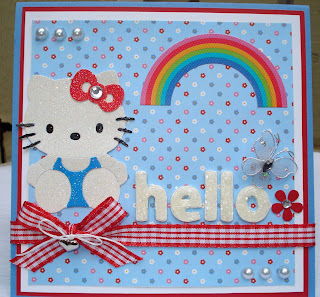 It seems like this week just flew by. As usual, I've been feeling pretty tired due to the pregnancy, so I didn't get around to taking pictures of this card until today. This is a card I've been working on for a while. It's for the June OCS (one card swap).
Sorry the pics are a little dark. I was having trouble with my daughter's camera. Also, I have to use a different computer since my other one crashed (UGH). Sooo...I do not have access to Photoshop at the moment *BOO HOO*.
Anywho, the challenge for this month's swap was to incorporate a FAVORITE. I included many of my favorites when making this card. I used blue, red, and white cs by Bazzill. It's my go-to cs and has been my fave for years. The background pp with flowers is actually the reverse side of some Snow White themed pp by Reminisce. They have the cutest, cartoonish line of fairtytale pp out now!
I used Doodlebug glitter paper for the Hello Kitty Sizzlits die cut. Oh, how I *heart* Doodlebug glitter paper -- actually, ANYTHING by Doodlebug!!! I added some bling to her bow because every girl needs to have a little bit of bling, right? Also, if you know me, you know I love bling!!!

The rainbow sticker is from the Doodlebug Icons Sticker set. The butterfly sits on top of a pop dot. I absolutely love dimension, so I incorporate pop dots a lot in my projects.

The little red daisy was cut from a punch. Again, I included some bling here. 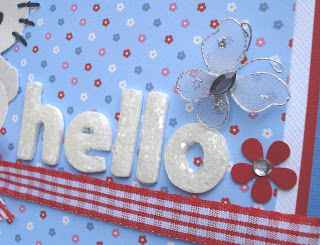 The "hello" sentiment was made using another one of my favorite products by one of my favorite companies: Maya Road. I love using blank chipboard pieces because I can paint or cover them with pp to match my project or get them to be the exact color I want. Although, it can be tedious, one of my favorite techniques is utilizing my Making Memories acrylic paints to paint the chipboard in the color I need at the moment. I like to then follow up with glitter and Glossy Accents. Here, I used white paint and then covered with glitter from a Martha Stewart collection. The glitter was sealed with Glossy Accents.

I adore gingham ribbon, and I thought some red gingham would go perfect with the feel of this card. I included a little heart charm tied on with Scrapper's Floss and then finished the front of the card with pearls by Kaiser Craft. 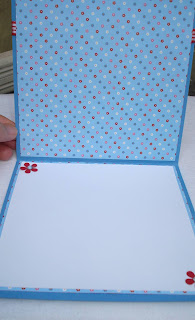 The inside of the card has been lined with the same pp by Reminisce. I included more of the punched daisies with bling on a white liner provided for writing purposes. I hope my partner likes her card!

I haven't been out in a while, so this past Saturday night was a special treat for me. I went out to dinner at Hapa Grill in Kapolei to celebrate my girlfriend's Big 3-0. She's the one in the middle, and she happens to also be pregnant -- due 3 weeks before me! She's also having a girl! 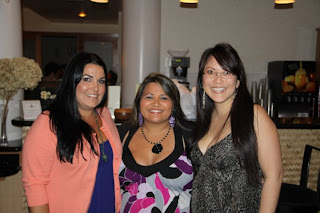 While I have heard some good things about Hapa Grill, I would have to say that I was a little disappointed in my shrimp scampi dinner. I love capers and usually order any dish that has it with extra capers. I forgot to this time and realized I really should have -- because there were a total of TWO capers on my plate! How disappointing. I also found the cream sauce a little bland for my liking -- although I seem to have that problem often with cream sauces for some reason.
Other than that, I enjoyed catching up with my girlfriends, especially since I have not seen these two since last year. We laughed at how, a year ago, we were celebrating my girlfriend's birthday at Oceans 808, dancing our butts off and getting our drank on. Now, 3 of us in the group are pregnant! LOL (The third girl moved to the mainland)
It's always nice to have a ladies' night out every so often, even if there's no drinking or dancing involved. While I wasn't pleased with my meal, I still had a good time. After all, it's the company that matters! 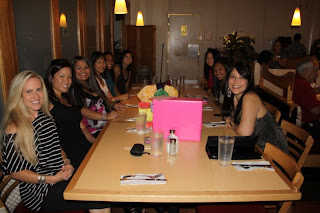 (the ladies before dinner was served: we wanted to take the pic
before we messed up our lipstick...lol)
Posted by Dena at 6:13 PM No comments:

Welcome to my blog! My name is Dena, and I love papercrafting! I love scrapbooking, cardmaking, and photography -- although it seems like I do more collecting of supplies than anything else! EEK!

I started with rubberstamping around 2001'ish. It was around that time that scrapbooking started to really take off and evolve. That's when my interest piqued. I've been hooked since then but have taken lots of breaks due to lack of time. But, with another baby on the way (no, that's not a beer belly in my pic -- I'm actually pregnant! LOL), I've decided that I don't want another stack of photos piling up, so I need to make the time to scrap and journal!
I tend to favor cutesie, girly things -- think Doodlebug, Imaginesce, and Sassafras Lass. I also absolutely *heart* Maya Road products. I'm a technique person, so it's not unusual for me to combine different techniques in a project such as glittering my own chipboard or using acrylic paint, etc ... I love pushing myself to try different things.
I mainly work with bright, fun colors, but I will dabble with vintage from time to time -- particularly, Valentine's Day and Christmas themes. I also toy with inking and distressing, too.
These are older creations, but I thought I'd share to give you all a sense of my personality and style.

Some altered paint cans I did way back. The Raiders can was obviously for a Raiders fan. I rolled up a Raiders t-shirt that was his Christmas gift. He loved the can and kept it in his garage near his tools. The tinsel trim actually looked like little footballs. 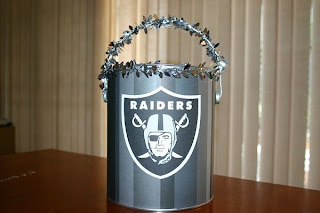 I made this one for my girlfriend's b-day one year. She loves anything Elvis and actually has the same b-day as Elvis Presley! 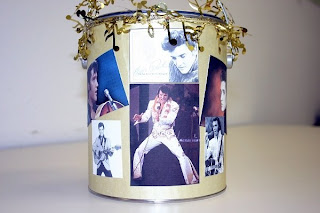 Halloween treat can for a friend's son. I made several of these one year. Word of caution to parents: you really need to carry a plastic bag to periodically empty out the can as it doesn't hold very much. 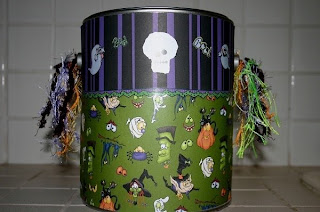 Wall hanging I made for a friend in a coffee-themed swap last year. She works as a barista at Starbuck's. 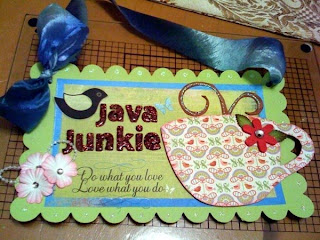 ATC I made for a "I've Learned" ATC swap last year. I used glossy accents on the witch's costume and the words. You can't tell from the picture, but I also used glow-in-the-dark embossing powder on the moon. 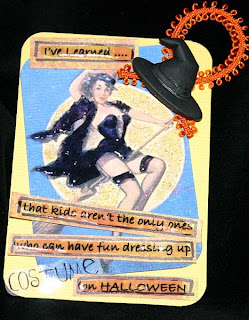 This one was one of my favorites and says a lot about ME : kinda sassy-tough but girly at the same time! I used the glitter lace technique for the background for a girly touch. Sorry the picture doesn't show it too well. I often work on projects late at night and am just too lazy/tired to fiddle with my camera settings! Anywho... I chose to punch the butterfly out of metallic paper to go with the motorcycle and add a little bit of toughness to the ATC. 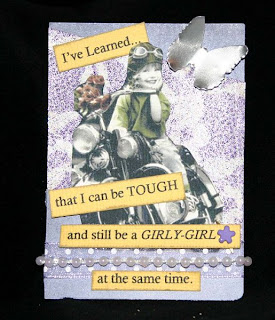 I'm working on some cards and other projects this month. Will post those projects when they are done. Thanks for looking!
Posted by Dena at 2:41 PM No comments: