My oldest daughter, Mikayla, was born on October 10th. Being that this year is 2010, it meant that her bday would be celebrated on 10-10-10. She wanted to have a bunch of friends over for a slumber party, scary movies, pizza, and cake.

Some of the things Mikayla loves are skulls and the color turquoise. She chose this design from Liliha Bakery. 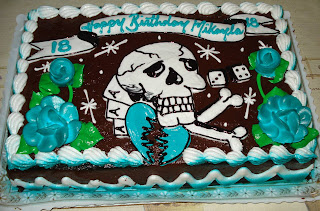 The girls had a great time talking story, putting makeup on each other, and just being girls. We gave each of them a goodie basket with candies and little Halloween trinkets such as pencils, spider rings, etc.. as a thank you. I got these great buckets in bright colors from Pricebusters for 99 cents each. I really love these buckets. I'm thinking of picking up a bunch of red ones to use at Christmas time.

The great thing about putting these together is that Mikayla did most of the work after I did the first one. She even used the Cricut to do the lettering on the front. 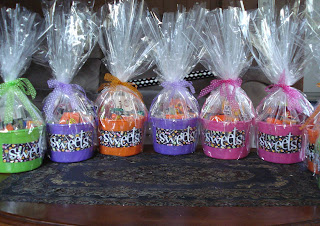 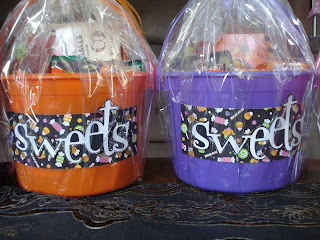 That night, we made sure to log onto a website that displayed the time. We wanted to take a picture at 10:10:10 p.m. The timing was a little tricky with the camera, so I took several practice shots. I definitely did not want to miss a once-in-a-lifetime moment! Thankfully, I caught it on camera !!! 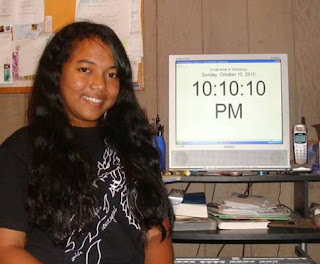